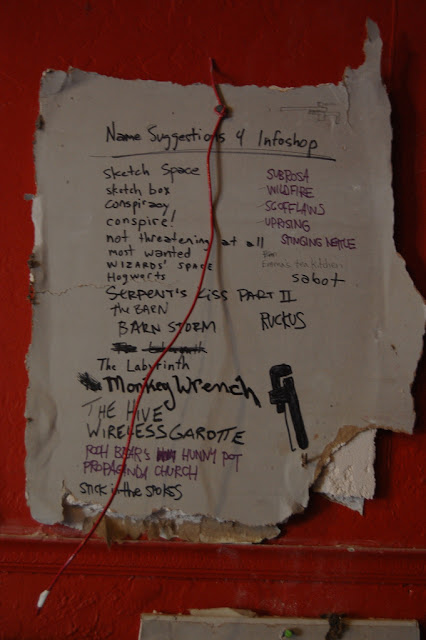 Back in September 2008 we were working hard to transform a vacant and dusty retail shop into a vibrant anarchist social space and parking lot into a lush garden.  Almost as difficult was coming up with a suitable name that everyone liked.  So a piece of drywall was nailed up, and a pen was hung from the nail.  Anyone who came by to help could add a name. As you can read (list on left), names ran the spectrum from inspired to silly.

The word subrosa was lifted from Emma Goldman's Living My Life where she wrote repeatedly about subrosa plans and endeavors.  Subrosa, that has a nice poetic ring to it.  Add the name to the list after Sitck in the Spokes (which was a playful poke at our neighbors the Bike Church, another wonderful project).  Research into the origins of the word revealed that at times in distant past people would place a rose above them and then make a pledge of secrecy and confidentiality to each other.  I also interpreted this as meaning they would be in support of each other in a world that is full of adversities.  We chose to spell the word SubRosa.

On the rainy night of the space's opening November 1st 2008 (another story in itself) one person came to the celebration with a rose that was hung from the wooden beams overhead.

At SubRosa we strive to have each others's backs, in support for each other and in opposition to the state-capital-status-quo.  That can take many forms at SubRosa.  It is a space that is run by a collective according to anarchist principals.  There is no boss, and we make decisions together by consensus.  SubRosa is a space where one is welcome whether or not a person has a roll of bills or a ball of lint in their pocket.  People can meet informally (hanging out inside or the courtyard) or formally (via Free Skool classes or events) and share with each one another other ways of relating.  There is a plethora of radical reading material available, offerings from the anarchist library to the Meristem Health Distro to other radical zines and books.  Ultimately, SubRosa is what we make of it, and in that spirit there is a multitude of possibilities to be realized.

And the rose is still hanging from the rafters over three years later.
posted Wednesday, May 16, 2012